Amazing Collection of Bikes and Cars Owned by John Abraham

John Abraham is one of those Bollywood actors who have great taste when it comes to automobiles. The model-turned-actor’s love for motorcycles is well-known ever since he made a starry presence in a Bollywood movie, which gave him the recognition of an avid biker as well. John has got an extremely desirable collection of motorcycles and a few cars, which are mentioned as below: 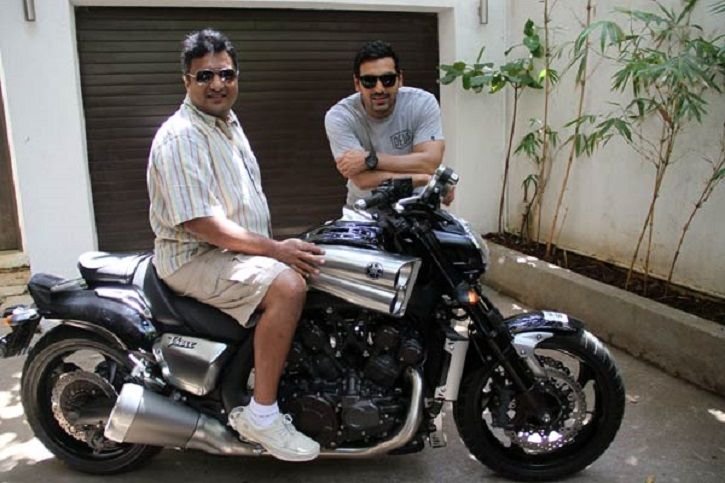 The Yamaha VMax belonging to John Abraham is a 60th Anniversary Edition unit, which was gifted to the actor by Yamaha Motor India. John has had a long association with Yamaha as its brand ambassador in India, and this VMax was a great example of gratitude shown by the company.

Compared to the regular version, the Yamaha VMax 60th Anniversary Edition is finished in a theme of black, including for the engine and dual-sided exhaust pipes. The black paint of the motorcycle is well contrasted with a yellow stripe running in the middle of the fuel tank and front and rear fenders. The Yamaha VMax power cruiser was available in India for Rs 27.58 lakh and came with a 1679cc V4 engine which makes 200 bhp of power and 166 Nm of torque. Another legendary motorcycle from the world of triple tuning forks in the garage of John Abraham is the mighty Yamaha YZF R1. The R1 is the litre-class flagship supersport motorcycle from the Japanese bike maker, and John has got on painted in the trademark colour scheme of Yamaha Racing Blue.

The Yamaha YZF R1 was available in the Indian market before the BS6 emission norms kicked in. The motorcycle was available for Rs 25 lakh and came with a Euro-4 compliant liquid-cooled 999cc engine with a cross-plane crankshaft. The inline-four engine produces 200 PS of maximum power and 112.4 Nm of maximum torque. The latest iteration of the Yamaha YZF-R1 with Euro-5 engine is yet to arrive in India.

Originally launched as a direct competitor to the Suzuki Hayabusa to challenge its title of fastest production motorcycle in the world, the Kawasaki Ninja ZX-14R was the biggest and most powerful iteration of the Ninja at one time. However, the motorcycle has been replaced by Ninja H2 SX. John still has a Ninja ZX-14R in a sinister shade of black.

The Kawasaki Ninja ZX-14R was offered in India in its global-spec form, with a gigantic liquid-cooled, inline-four, 1441cc engine, which makes a maximum power output of 200 PS and a maximum torque output of 158.2 Nm. The Ninja ZX-14R was available in India till the deadline of BS4 motorcycles for Rs 19.7 lakh. Honda silently launched its flagship supersport motorcycle, the CBR-1000RR-R, in the Indian market in 2020 at an eye-watering price point of Rs 34 lakh. Despite its high price, the CBR-1000RR-R managed to find a few homes, with that of John Abraham being one of them. The Bollywood actor has got a CBR-1000RR-R in a shade of black.

The latest iteration of the Honda CBR-1000RR-R, which is lovingly called “Fireblade” by the motoring enthusiasts, gets a host of modern-day electronic riding aids and a very capable liquid-cooled, inline-four, 999cc engine. With a maximum power output of 217 PS, it is the most powerful Fireblade ever made, while the torque output is rated at 113 Nm. The Aprilia RSV4 RF came with a liquid-cooled, V4, 999cc engine, which produced maximum power and torque figures of 200 PS and 115 Nm. Armed with the best of equipment like Ohlins-sourced suspension, Brembo callipers for brakes and a host of electronic riding aids, the RSV4 RF was one of the first supersport motorcycles to touch the 200 PS mark. The Ducati Panigale 1299 was based on Panigale 1199 but came with a few visual tweaks, additional electronics and a bigger and more powerful liquid-cooled V2 engine. This 1299cc engine claimed maximum power output of 205 PS and a peak torque output of 144.6 Nm, making the Panigale 1299 the first-ever Ducati supersport motorcycle to cross the 200 PS mark. When it comes to design, the MV Agusta F3 800 is highly praised for the great piece of art on two wheels it is. At Rs 17.99 lakh, the premium middleweight supersport from MV Agusta was a pricey motorcycle for its size and was priced equivalent to litre-class super sports from other bike makers.

John Abraham owns an MV Agusta F3 800 in the shade of Grigio Ice, which is a combination of white and grey with red highlights for the frame and wheels. Powering the MV Agusta F3 800 was a liquid-cooled, inline-three, 798cc engine, which pumps out a maximum power output of 150 PS and a peak torque output of 88 Nm. The Kawasaki ER-6n was one of the first middle-weight motorcycles to get launched in India and is the oldest motorcycle in the current garage of John Abraham. The actor has a black-coloured ER-6n, which is a rather subtle shade for this simple looking naked roadster from Kawasaki.

The Kawasaki ER-6n was replaced by an edgier Z650 but was powered by the same liquid-cooled, parallel-twin, 649cc engine in a more powerful state of tune. The engine of the ER-6n is used to make 72 PS of power and 64 Nm of torque. Before it was discontinued, the Kawasaki ER-6n was on sale in India for Rs 4.78 lakh.

The KTM Duke 390 is the humblest motorcycle in John Abraham’s bike collection, but for many motoring enthusiasts, it still is a dream motorcycle. The bike is highly praised for its cutting-edge design, a power-packed engine and premium hardware for a rather affordable price of Rs 2.87 lakh. John has a Duke 390 in a shade of grey with an orange-coloured frame and wheels.

The KTM Duke 390 gets a single-cylinder, liquid-cooled, 373.2cc engine, which even after so many years continues to be the most powerful engine in its category. Duke 390 claims a maximum power output of 43 PS and a peak torque output of 37 Nm. Apart from Yamaha, John Abraham has been a brand ambassador for Nissan India in the past. This association gave John a black-coloured Nissan GT-R, which is immensely worshipped by motoring enthusiasts as one of the most powerful and fastest supercars to have ever made on this planet.

Powering the Nissan GT-R is a 3.8-litre twin-turbocharged V6 petrol engine, which makes a maximum power output of 565 bhp and a peak torque output of 637 Nm. These figures brought it in the league of much higher priced European supercars with bigger but equally powerful engines. The last recorded price of the Nissan GT-R in India was Rs 1.99 crore. Another Nissan which was presented to John Abraham for his association with the Japanese carmaker is the rather humble Nissan Terrano. Like the GT-R, this Nissan Terrano is also finished in a shade of black and is in the diesel-AMT version, which was on sale in India for a brief period before it was replaced with the Nissan Kicks.

The powertrain combination powering the Nissan Terrano owned by John is a 1.5-litre four-cylinder diesel engine, which makes 110 PS of power and 245 Nm of torque and is mated to a 6-speed AMT. The Nissan Terrano was a badge-engineered version of the Renault Duster, with a subtly tweaked exterior and interior. The Audi Q7 was one of the most preferred choices of luxury vehicles by Bollywood actors and actresses, and John Abraham is one of those stars to have ever owned this luxury SUV from the German carmaker. The Audi Q7 was widely opted for its great road presence and comfortable ride quality.

John Abraham owns a first-generation black-coloured Audi Q7, which is powered by a 3.0-litre V6 diesel engine. Mated to a 7-speed dual-clutch automatic gearbox, this engine makes a maximum power of 245 PS and a maximum torque output of 550 Nm. Easily the humblest addition in the garage of John Abraham, the Maruti Suzuki Gypsy is a hardcore utilitarian four-wheel-drive compact SUV. The Gypsy is one of the top-favourite vehicles of the off-road driving enthusiasts for the immense go-anywhere abilities it has with its sturdy suspension and four-wheel-drive system.

The Maruti Gypsy owned by John Abraham is a modded one with off-road spec tyres and bigger alloy wheels. The Gypsy is a no-nonsense off-roader with a bare-basic interior that even lacks essentials like power windows, power steering and air conditioner. The 1.3-litre four-cylinder petrol engine of the Gypsy makes a modest 80 PS of maximum power and 103 Nm of maximum torque.