Kawasaki has brought in the entry-level off-road spec motorcycle duo of KX250 and KX450 in the Indian market. While the new Kawasaki KX250 has been launched at Rs. 7.99 lakh, the bigger Kawasaki KX450 will set one back by Rs. 8.59 lakh (both prices ex-showroom, India).

Designed and engineered primarily for those who love to hone their riding skills off the road, the new Kawasaki KX250 and KX450 aren’t road legal motorcycles and are strictly made for dirt trails and terrains. These two motorcycles have joined the Kawasaki KX100 in off-road spec lineup from the Japanese two wheeler major, which was already on sales for Rs. 4.8 lakh.

Both these motorcycles come with a focused design comprising of off-road tyres with knobby tread blocks, spoke wheels, high-mounted exhaust and front fender and flat single piece seat. However, as weight saving measures, both the KX250 and KX450 miss out on headlight, turn indicators, tail lamp, rear view mirrors and instrument console.

Both the Kawasaki KX250 and KX450 are strictly meant for riding in closed environments, as they are not street-legal. The only paint option for both the motorcycles is Kawasaki’s signature shade of green. These off-road motorcycles are brought to India via the CBU route. 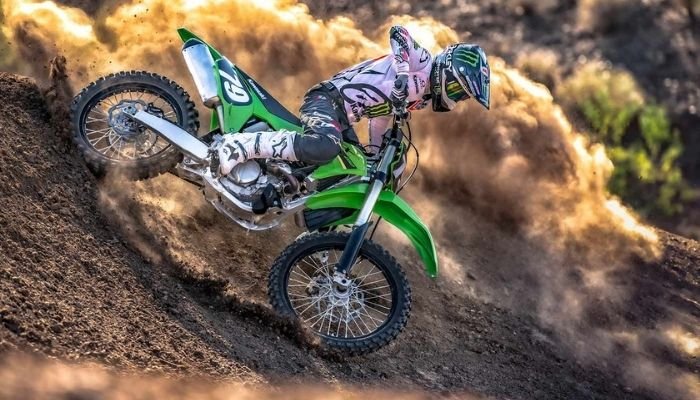 Compared to the previous version of it, the new Kawasaki KX250 gets a series of new mechanical upgrades, such as electric starter, launch control mode and hydraulic clutch. The four-stroke, single cylinder, liquid cooled, 249cc engine of the Kawasaki KX250 now makes around 1.38 bhp more power than the erstwhile version. This has been made possible with a higher spring rate for the valves, revised design for crankcase and combustion chamber and new DFI setting data selection comprising of three different engine maps.

Apart from the engine, the other mechanical highlights of the Kawasaki KX250 include aluminium perimeter frame, 48mm upside down hydraulic telescopic forks at the front with 314mm travel and uni-trak adjustable mono-shock at the rear with 316mm travel. While the ground clearance of the KX250 is 335mm, the motorcycle has a seat height of 950mm. The motorcycle rides on 21-inch front wheel and 19-inch rear wheel, and gets a braking combination of 270mm petal disc with dual piston calipers at the front and 240mm petal disc with single piston calipers at the rear. The new Kawasaki KX450 now serves as the flagship motorcycle from the KX lineup of non-legal off-road motorcycles from Kawasaki. While the design of the KX450 remains more or less similar to the smaller KX250, there are major mechanical advancements under the skin. The motorcycle gets 49mm upside down hydraulic telescopic forks with 305mm travel at the front and adjustable uni-trak mono-shock with 307mm travel at the rear. While the 270mm front petal disc with dual piston calipers is the same as that on the KX250, the rear braking setup has bigger 250mm petal disc brake with single piston caliper.

Powering the Kawasaki KX450 is a four-stroke, single cylinder, liquid cooled, 449cc engine, the power and torque figures of which are undisclosed by the manufacturer. The motorcycle has a ground clearance of 340mm and seat height of 955mm.