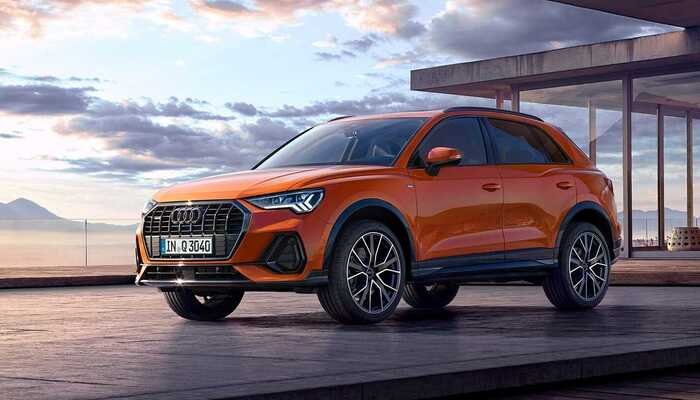 After a long gap of two years, Audi has re-introduced the Q3 compact SUV in India in the form of the second-generation model. Launched in two variants, the new Audi Q3 has arrived as a petrol-only model this time. Bookings for the new Audi Q3 are already live on Audi’s official website and across its dealer network for Rs 2 lakh, with the deliveries slated to start towards the end of 2022. This version of the Audi Q3 is on sale in overseas markets for almost four years now.

The new Audi Q3 has been launched in two variants – Premium Plus and Technology. While the Premium Plus has been priced at Rs 44.89 lakh, the higher-spec Technology variant is priced at Rs 50.39 lakh. Both these variants of the Audi Q3 are locally-assembled, unlike the smaller Q2, and come with a petrol-automatic powertrain as standard. Unlike the previous-generation Audi Q3, which was also available with a diesel engine option, this new version of the SUV is now available only with a 2.0-litre four-cylinder turbocharged TSI petrol engine. Paired with a 7-speed dual-clutch automatic gearbox and Quattro all-wheel-drive system as standard, this new engine now produces a maximum power output of 190 PS and a peak torque output of 320 Nm. It is the same engine which powers other cars from the Skoda-VW group like Volkswagen Tiguan, Skoda Octavia, Skoda Superb, Skoda Kodiaq and Audi A4. For the Q3, Audi claims a 0-100 kmph sprint time of 7.3 seconds.

Compared to the previous-generation version, the new Audi Q3 is longer and wider, while having a longer wheelbase. The overall design looks very much inspired by the bigger Audi SUVs like Q5 and Q7, especially at the front where it gets the octagonal grille with vertical slats and angular creases on the front bumper. The all-LED headlamps and tail lamps have become slimmer in appearance, thus making the new Q3 look even sharper. The side profile also gets more prominent creases and new 18-inch alloy wheels. There are five colour options to choose from – Glacier White, Mythos Black, Pulse Orange, Navarra Blue and Chronos Grey.

For the Indian-spec Q3, Audi has introduced two new trim levels to choose from – Okapi Brown and Pearl Beige, much like the bigger Q5 SUV. The overall dashboard layout and driver’s cockpit are vastly different from the older model, as it looks tech-packed with a new 10.1-inch touchscreen infotainment system integrated into the centre console. The new Q3 comes with physical buttons for various functions for the infotainment system and the dual-zone automatic climate control. Other features which grace the cabin of the new Audi Q3 are a 10.25-inch full-TFT virtual cockpit display, panoramic sunroof, park assist with reverse camera, 30-colour ambient lighting and a range of ADAS features.

The new Audi Q3 will compete with its arch rivals like Mercedes-Benz GLA and BMW X1, apart from the newer rivals like Volvo XC40 and Mini Countryman.