10 Best Cars From The Car Collection of Cristiano Ronaldo

Apart from being one of the most revered footballers of all times, Cristiano Ronaldo is highly respected for his taste in automobiles as well. The Portuguese soccer master is known for having few of the most desirable cars in the word, most of which are exquisite super cars. Following is a list of ten of the best cars from the Cristiano Ronaldo Car Collection: The Bugatti Centodieci holds the candle for being one of the most special inclusions in the garage of Cristiano Ronaldo, for the fact that it is a super elusive car restricted to only 10 units in the world. The ace footballer booked this car back in 2019, which is considered to be one of the most expensive production cars ever made. The Bugatti Centodieci is one limited edition hypercar which packs in an 8.0-liter quad turbocharged W16 engine, which makes a whopping 1600 PS of power. What’s the price, you ask? It’s around EUR 8 million (almost Rs. 70.62 crores)! Cristiano Ronaldo is known for his love for Bugattis, and after getting a previous generation Veyron, he also got his hands on the Bugatti Chiron, the current flagship supercar from the elusive French car maker. The Bugatti Chiron was launched back in 2016, and Ronaldo got one in 2017, on the occasion of his 400th match for his previous soccer club Real Madrid. The Chiron is powered by an 8.0-liter quad-turbocharged W16 engine, which makes 1500 PS of power and 1600 Nm of torque. Ronaldo’s Chiron is finished in a dual tone scheme of silver and black. The current flagship super car from Lamborghini, the Aventador, made its first public debut almost a decade ago, but it still looks super cool and present day thing, thanks to its edgy and hunkered down design. Cristiano Ronaldo got an Aventador without much delay in 2012, with his car finished in a stealth shade of black. The Lamborghini Aventador was launched with a 6.5-liter naturally aspirated V12 engine, which is capable of making 700 PS of massive power output. Ronaldo gifted this car to himself on his 27th birthday. The Rolls Royce Cullinan is gradually making its presence in the garages of all billionaires around the world. And why will it not, for it is the first ever SUV and most expensive vehicle from Rolls Royce ever – a car maker known for making the most luxurious vehicles on this planet. Being a billionaire himself, Cristiano Ronaldo too has got a Rolls Royce in a simple but highly sophisticated shade of pure white. The mammoth SUV gets a 6.75-liter twin turbocharged V12 petrol engine, which makes 571 PS of power and 850 Nm of torque. While Cristiano Ronaldo owns a few Ferraris in his garage, this one has to be the most special of them all. The Ferrari F12 Berlinetta TDF owned by Ronaldo is one of the 799 units of this exclusive limited edition car made by the Italian super car maker. Finished in a unique shade of burgundy, Ronaldo’s Ferrari F12 Berlinetta TDF is powered by a 6.3-liter naturally aspirated V12 engine, the maximum power and torque outputs of which are rated at 740 PS and 690 Nm respectively. While the car can reach a top speed of 338 kmph, it can cover 0-1oo kmph sprint in less than 3 seconds. The McLaren Senna is one of the most expensive and special cars in the history of McLaren and is the third edition in McLaren’s Ultimate Series, which also included F1 and P1 previously. The McLaren Senna owned by Cristiano Ronaldo is one of the 500 units ever made and is finished in a premium shade of silver with red accents. The McLared Senna sources is power from a 4.0-liter twin turbocharged V8 petrol engine, which makes 800 PS of maximum power and 800 Nm of maximum torque. The Maserati Grancabrio might be the oldest one in this list of cars owned by Cristiano Ronaldo and is not as flashy and super exclusive as the others here. However, the underrated Grancabrio is kwown for its classy design and a sweet sounding exhaust note, the latter of which is one of the bests in the business. Ronaldo owns a Maserato Grancabrio in a shade of black, and is powered by a 4.7-liter V8 engine sourced from Ferrari. This engine, in the Grancabrio, makes 440 PS of maximum power and 490 Nm of maximum torque. A rich garage of supercars is incomplete without a Porsche, and Cristiano Ronaldo owns one of the best supercars made by Porsche till date, the 911 Turbo S. The Porsche 911 Turbo S was purchased by the footballer in 2016, and is finished in a subtle shade of grey. The Turbo S is the most powerful variant in the 911 lineup, with the model owned by Ronaldo having a 3.8-liter engine, which is capable of putting up 560 PS. The car can reach the 100 kmph mark from standstill in just 2.9 seconds. 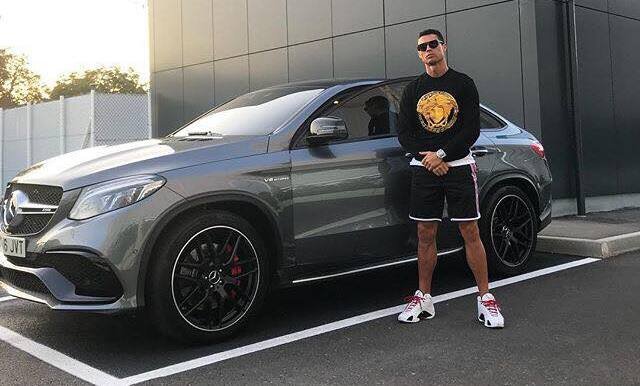 Cristiano Ronaldo is more inclined towards supercars and super saloons than SUVs, but the Mercees Benz GLE63s AMG owned by him needs a special mention to him. This is one of the everyday cars of Ronaldo, but this is not a regular Mercedes Benz by any means, for it packs in the AMG’s rich expertise in performance and technology. The Mercedes Benz GLE63s AMG is an SUV-coupe which comes fitted with a 4.0-liter bi-turbo V8 petrol motor, which produces 610 PS of maximum power and 850 Nm of maximum torque.

ALSO READ: Which Are The Most Expensive Cars Sold In India? Cristiano Ronaldo got his hands on an Audi RS7 back in 2017, when he was still a part of Real Madrid football club. The RS7 was given to him by Real Madrid as the club’s tradition of giving an Audi car to its signed players every year. The Audi RS7 owned by Ronaldo gets a rich looking shade of Panther Black, and gets a 4.0-liter twin turbo V8 petrol engine which is capable of making 605 PS of maximum power and 750 Nm of peak torque output.

10 Most Affordable Cars to Get Turbo-Petrol Engines